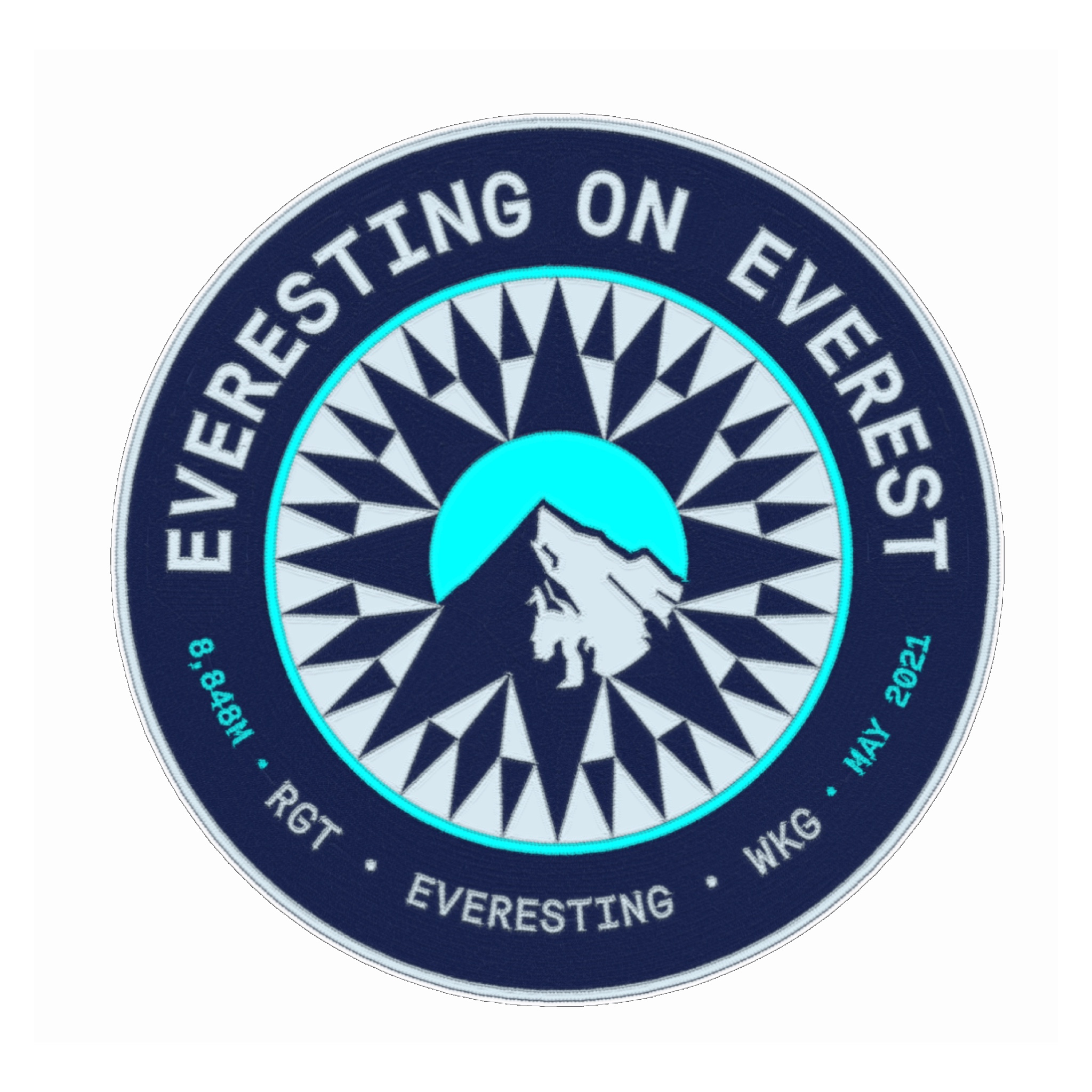 When I happened to read on May 7th that it is possible on RGTcycling until May 17th. to take part in a virtual Everesting Challenge (vEveresting), the idea quickly matured to do so and combine it with a spontaneous fundraising campaign. But time would be very short. Because in preparation for the Race Across Germany (RAG), which was scheduled for June 4th, I actually wanted to do a long tour of around 360 km on the long weekend on Ascension Day. Where should a vEveresting fit in there? On the same evening I received the information from the RAG that the Race Across Germany from Aachen to Görlitz was postponed to September 10th due to the curfew and the unsafe situation. Perfect, so nothing stood in the way of vEveresting than overcoming your weaker self. I didn’t have the 12h of the vWTTC in my legs anymore, but I still had it in my head. It doesn’t matter, the kids in Malabon need support, so let’s get into the fun….

A lot of publicity on our own behalf to collect donations was no longer possible. Only an update as an email, which I sent via Betterplace.org, had to be enough. The idea was to increase the total donation amount that I have collected so far for Projektgruppe-malabon.de to 8,848 euros. If this is done by May 13th, I would dare to take part in the vEveresting Challenge on May 14th. And the amount was more than reached! On Thursday (May 13th) there was a casual speech of 120 km in preparation. The idea that it would be about the distance that should only go up the next day made me doubt the sense and feasibility of the idea. But I couldn’t get out of the number now.

Technically it was the same setup as in January. The construction was much faster than 4 months ago, because I knew where and how what had to be wired and placed. The only difference was the bike. In January my “summer bike” was installed on the Smarttrainer, now in May my “winter bike”, including mudguards :-).

After I got up at 06:00, the technology was started and breakfast was started. Muesli with cottage cheese and yogurt. Two more toasts, too much is uphill, even virtual, not good.

I actually wanted to leave at 7:15 am, but a few minor technical ailments didn’t allow me to start until 7:37 am. The biggest concerns were software, temperature and legs …

There were a few problems on the RGTcycling platform in the days before. Sometimes you couldn’t register or were suddenly “kicked out” during a trip. The recommendation for the vEveresting was to take regular screenshots of the screen. Should you not be able to continue driving due to software problems, or you would have to start again from scratch, you could then concatenate the trips and submit them with the screenshots as proof. Should I not be able to continue driving on RGTcycling, my plan B was to continue driving on the Zwift platform. Fortunately, that wasn’t necessary.

The app crashed twice, but with an immediate restart I was able to continue the challenge from the same point without any problems. Nevertheless, it gave me two small adrenaline rushes.

The two fans had to run quickly. Despite the open window, it soon became very warm. No wonder, because next to me there were quite a few electronic devices with a lot of waste heat in use.

Until the first live stream at 8:00 a.m., the time passed quickly. I was very happy that a few friends also watched this first live stream. Because either it was a bridge day, and it was definitely planned, or you had to work at this time. At around 9 am I was on the summit for the first time and fully on course in terms of my estimated duration and performance (1h 22 ‘for the ascent at 160 watts average power)

During the departure, the sweaty clothes first had to be changed. In addition to eating, drinking, kicking, live streaming and a little Instagram, I also tried to write something in the live blog on the website, made phone calls, and also read and answered e-mails. The longer it took, however, the more difficult it got. Also, because you are totally sweaty with the touchscreen and touchpad only having problems. In the first two hours I took it easy, with 160-180 watts uphill with an average of 8% gradient is slow.

At RGTcycling, more than 300 drivers had registered for this challenge by Friday. You could start (and end) between May 1st and 17th. At 8 o’clock in the morning there were 4 drivers on the route, myself included, and I was sure that there would be more as the day went on. A colleague from England drove as fast as me, the other two were a bit faster. As it turned out, the two fast guys only wanted to do one lap and said goodbye after 25 (or even 12.7 km on the summit). My buddy Samuel’s avatar flashed briefly. He let me know via WhatsApp that he would like to accompany me for a round or two after work. That was real motivation, even if it was hours away.

I have always compared my current altitude meters with the Alpine peaks, and later with those in the Andes and Himalayas. Unlike in reality, the air in my “Muckibude” was not thinner, but more and more stuffy and thicker.

A thunderstorm approached at noon (in real life). Cooling down would be good, but after the lightning bolt found its way into our house via DSL and telephone line last summer, I was a little worried. But luckily there were no disconnections or worse.

The second livestream started at 2:00 p.m. for around two hours and brought a little variety to the matter. By now I was wearing the third set of clothes. Also exactly half of the altitude difference was reached around 2:00 p.m., i.e. half time. But that also meant that I had to bring forward the last live stream, which was scheduled for 8 p.m. Fortunately, I was ahead of my estimated time of arrival.

The virtual route did not have an even gradient. It started relatively constant with a 7-8 percent gradient, was also a little flatter (for a few hundred meters) with 5%, only to level off again between 7% and 8%. In the end it got really steep, 19% incline. The idea was to model the real ascent on Mount Everest. Of course, you can’t climb a steep face with a bike. So everything was scaled down to make it drivable. I thought that was a great idea!

There was an elephant race between the Englishman and me. He drove about 0.4 km / h faster than me on the climb. When I started, he was almost done with his first lap and was about 4 km behind me. After 8 or 9 hours (can’t really say when exactly) he caught up with me and we did two laps (his last two) together. In the end he struggled and I kept going at my pace. But he was only a few hundred meters behind me when he had made his vEveresting Challenge. During these two rounds, we talked about the chat function in the software. He drove in his garage, with the gate open, somewhere in England, and also cursed the temperature and looked forward to a beer afterwards.

When I was in the eighth of the required nine laps, around 6:45 p.m. in the middle of the climb, Samuel was there. His avatar was waiting down in the valley, but it should be another 50 minutes before I reached him. That was a great motivation for the last climb. There was no slipstream uphill, pushing and pushing is also virtually impossible. But with someone together, even if only in a crazy, virtual world, is 1000 times better than driving alone in a “computer game”. Thank you Samuel.

At 7:43 p.m. the time had come and the 8,848 vertical meters were over. The total of donations received at this point in time was 9,132.48 euros. Reason enough to add this difference of 284 meters in altitude. Samuel also accompanied me up to this mark. Around 20:20 it was done. The next house number in terms of challenges is 10,000 meters in altitude. There are also awards, etc. I’ll save that for another time 🙂 You still have to have goals.

Now, May 20th, the total amount of donations accumulates to €9502.48, meaning round abut €850 for 12 hours of cycling. Thank’s again to all of you who are still supporting!

For those interested in technology, a few more details:

Liveblog vEveresting on May 14th

Everesting on May 14th