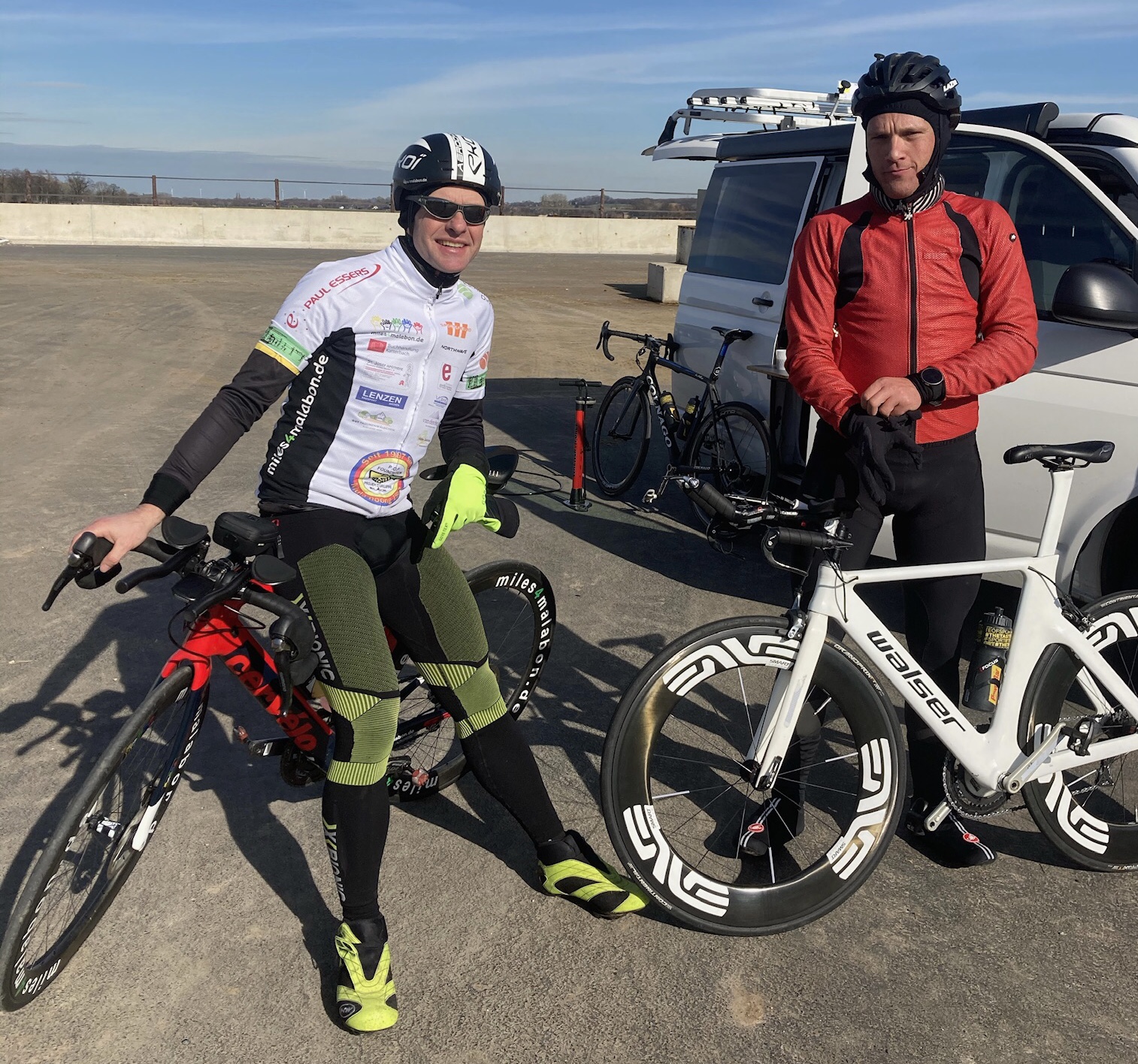 The last month was somewhat special, well let’s call it that way. I signed up for the “Ride for a Reason” challenge as I mentioned in my previous post. When I read a Instagram post from Dieter Göpfert that a rider, Martin Neitzke, started his ride of the race around Germany with Pirmasens as starting point, I quickly decided while having breakfast, to give him some company. A quick chat via mail with Dieter, and I got the mobile phone number of Martin’s support crew, who was supporting him during the ride. I informed them that I planned to join Martin for some kilometres to cheer him up. Accompany during an ultra event is always nice. As a rider you are most of the time on your own, so exchanging some words and stories while cycling lets the time pass by much faster.

Next was to check the route Martin would ride and load the tour to my cycling computer. The idea was to go straight to the route just south of Düren and to follow the route in the opposite direction so that I could not miss Martin. I should have enough time, no need to hurry, to meet him maybe between Kommern and Mechernich.

Then I decided to not take my Canyon bike but to go for the first outdoor ride in 2021 with my Cervelo. The sun was shining, and despite the low temperature in the morning, I found it was time to declare that winter is over. Thus, I took the Cervelo out of the smart trainer, mounted the rear wheel, and filled the bidons. It took less than one hour before it was clear that this was not a good idea. Taking the bike just from the indoor trainer and start for a long ride without proper checking, how stupid. After only some minutes I felt that the front brake did not work properly. Maybe the brake pads should have been exchanged, maybe because of all the dust from being used a lot on the smart trainer?

In the area of Düren, the performance got less and less, and just when entering the hilly Eifel area the front brake stopped working. Not funny since roughly 70% of the break performance comes from the front brake. Having no front brake on the nice descents around Mechernich is no good. Also, in traffic, it is not a smart thing at all. Unfortunately, it was a leakage of the hydraulic system, nothing you can fix on the road.

A couple of up and down hills later (I was sweating more down than uphill) in Frohngau, a bit south of Bad Münstereifel, I met Martin. A 180 degree turn and we were heading north. It was a great ride, got some refill when Martin changed to his time-trial bike and we continued passing Düren, Jülich, and the Sophienhöhe. I accompanied Martin until Holzweiler, close to Erkelenz before I wished him all the best for the tour and took the well-known roads home. After 194 km I reached home, safe despite no working front brake. I uploaded the ride to the „ride for a reason“ challenge and fixed quickly the brake problem. After a 130 km Ride on Sunday l enjoyed my first vacation day on Monday taking off for a 180km ride to the Schwalm/Nette area until Straelen being the most northern village of the trip. The way back was a bit special again, as there was a blocked road with an official deviation for cyclists. But more for mountain or gravel bikes and not for a Cervelo S3. Although I lost a lot of time during the 3-4 kilometers through the woods, II was still 20 minutes faster than on Saturday. However, I was not able to upload the ride for the challenge, but I also did not try hard, and it does not matter.

During my vacation, I continued riding, but shorter rides between 80 up to 120 km only, but with a bit higher intensity. Then it was time for some recovery and taking it easy.

Just when I wanted to start training again, I was forced to take an unplanned break of 10 days due to a bacteria infection. The fact that after a sunny period and temperatures of 25 degrees Celsius we faced a week of snow and cold weather made it a bit more easy to accept and I used the time to maintain my bicycles.

Now I am back on the road since today. I hope that the shape comes back quickly. What is a bit missing is motivation. Let’s see…

There are only 7 weeks left to prepare for the race across Germany. But if it will take place this year?

And what happened finally with the “ride for a reason” challenge? Out of 476 participants, my ride without a front brake qualified for rank 35. (external link to official ranking: Results)

Procedures of the Race Across Germany