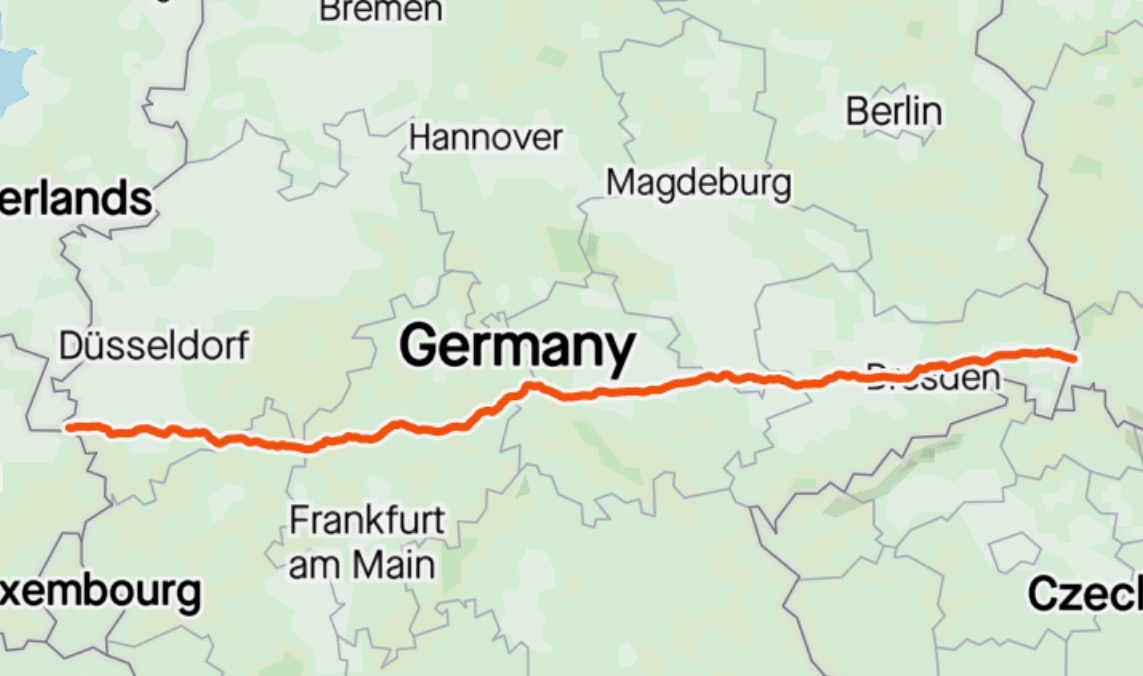 After the last preparations on Thursday, which included a good dinner with lots of carbohydrates, my “Miles 4 Malabon” campaign started on Friday at 6:30 am. Breakfast, put everything in the car and off to Vaals to start at the border. The weather looked better than reported, but more on that later.

It finally started at 8:45 a.m. A little late because the speedometer and smartphone behaved strangely. It should still show what that meant. With Hannes, Martin and Nico I drove comfortably to the Aachen market. The first hour and a half were therefore adequately accompanied.

The Malabon project group welcomed us goodbye to the Aachen market. Everything perfectly equipped with matching T-shirts and banners. With other friends and acquaintances it became a really big event. I was very happy to be motivated again. After the official start we went via Stolberg through Aachen and on towards Eifel to Gressenich, where it started to rain lightly, then via Schevenhütte to Gey. There Nico and Martin said goodbye heading back towards Aachen. With Hannes we rode over Kreuzau (where it stopped raining) over country roads and well paved (to be mentioned !!!) dirt roads into the Rhine valley.

There was a lot of traffic around and in Bonn, Friday afternoon. At the Kennedy Bridge, km 95, Loni waited with water, bars and cheese bread. After a short break, I crossed the Rhine. From now on I was alone. Everything went well until the navigation app in Pützchen went on strike. It could not be restarted. So restart the phone. Still no success. App deleted, including all offline maps and the route. Reinstall, load data, start live track, restart and release, finally continue …

“Fortunately” it started to rain afterwards, which cooled me down again. After 30 minutes, rain was almost no longer an issue for the rest of the tour. Up to Herborn it continued almost on the original route of the RAG (Race Across Germany). This route was actually planned and programmed on the mobile phone. But the smartphone app suggested a different way. Not nice to drive, but still okay. In Herborn (km 195) I “refilled” 2 liters of water at a petrol station and followed the original route towards Bad Hersfeld. The wind shifted from west to north and, as usually at evening, weakened.

Bad Hersfeld (km 320) is a challenge. At the RAG you have a special permit and can cycle on the main road. I had to search for the bike path first and wandered around a bit. At a petrol station I bought water and a small bottle of cola for the night. In addition a coffee and something to eat. Then I changed for the night, connected the lights and helmet lamp and left the city again via detours. Unfortunately, much back and forth always takes time.

In the meantime there was no more traffic, it was approaching midnight. In contrast to driving a car at night, mostly with music, the bike is quiet. Again and again a crackling and rustling in the undergrowth. Then suddenly on a great downhill game change. A deer crossed the road just ahead of me, already in my cone of light. Good thing I didn’t let go. But I had speed 70 and could not have done much. In the light I would like to thunder down the thing (the descent). That could easily be three digits…. Then I crossed the former zone border several times between Hesse and Thuringia until I could see the illuminated Wartburg on the horizon.

At the end of Eisenach the choice is yours. Garmin (speedometer) says on the left, Komoot (the mobile app) on the right. Short stop and look at the cards. Komoot suggests a route south that leads back to the Garmin Track a few kilometers later. OK. I take it because of the voice control. Even if I can no longer hear this Siri or Alexa voice after 380km. On the Garmin, I prefer to have my pulse, cadence and wattages displayed.
It was now well after midnight. The names of the small towns seemed unknown to me, but of course you can’t remember them all. Suddenly the Gotha entrance sign. From whaaat? Full braking, open the map app, take a deep breath, swear, close the map app. No alternative anymore. Now I was on the “South Route”, km 410, almost felt in Bavaria.. I knew it would now go through Erfurt and Weimar and Apolda instead of Sömmerda and Naumburg. My strategy of getting water at cemeteries at night was gone. What had I entered all the cemeteries on the original route as waypoints if the app doesn’t care? So the supply had to reach Zeitz, when the routes came together again.

A state capital at night. No traffic, good. And Komoot planned the Erfurt City Sightseeing Route for me. What more do you want? Through pedestrian-free pedestrian zones and over the market place past all ministries. In the end, a big road that you couldn’t cross. Unless you shoulder the bike, climb over barriers and crash barriers to be almost back on the track after 100m cross-country. But still somehow off this freight area. Done and further direction Weimar, for which I didn’t seem to have a tourist ticket. I was able to avoid the inner city a bit. It was getting light and fresh. 8 degrees Celsius and tired. Not a good combination. Stop, unpack a thick hat and thin gloves. Put on the rain jacket and continue. Much better. I became unfocused, but I still had a Coke in my jersey pocket. Didn’t help. At a bank in the middle of nowhere I made the decision to treat myself to a 10 minute power nap. Turn off the bike, timer to 10 minutes, siren as a signal tone. When I woke up I heard the siren, but for how long? No idea, I hadn’t checked my watch (by the way, it was 21 minutes). In any case, it was much better now and continued noticeably brighter towards Zeitz. Thanks to the sun, it quickly got warmer and I was able to repack gloves and hat.

The path along a former railway line was well paved, a blessing after the back and forth of the previous night. In Zeitz (km 530) water was quickly stashed at a gas station and a roll with cheese. Fill bottles and powder in, continue. Now, in the light, I knew the route again. Therefore the exit to Zeitz seemed to me to be “Spanish”. View of Garmin and smartphone. Still other routes. The decision was easy now. Garmin wins. Nevertheless, I added a new waypoint to Komoot. Where Christoph would wait with food. Christoph was already online and had always answered my messages quickly. Since the Garmin refused to navigate shortly afterwards (he only showed me “drive east on Vaalser Strasse”) again only Komoot, which kept guiding me from the federal roads to field and forest paths, sometimes with tar, almost always with cobblestones and sometimes without topping …
But always felt with an additional hill. I won’t arrive before Christmas!

At km 560 I wrote Christoph glad that I will arrive at the catering in 2 hours. Just stupid that I had miscalculated by almost 100km. But I soon noticed that, and it was quickly cleared up. In the meantime it was over 20 degrees Celsius and I took off my leg warmers. It was pretty tough, mainly because of the repeatedly proposed low-traffic but bad roads. In Rochlitz it went steeply uphill again over the Rochlitz mountain for a few kilometers, then finally towards Nossen, where Christoph wanted to meet me. At the entrance to the town, he waited patiently under a tree in the shade. I drove through Nossen in Christoph’s slipstream when I heard a familiar engine noise on my left. My wife and son Kristian, who left Aachen on Saturday morning, found me despite the broken live track. By chance they were checking if I was at the place Christoph planned for the catering. It was 30km to Christoph’s car with the food Once there, I was able to fortify myself for the remaining, now only 120km. My family went on to offer me a little stopover in Bautzen.

After Christoph’s catering in Wilsdruff we went down a rapid descent to the Elbe. First with tar and over 60 km/h, then on cobblestones of the finest kind. Well relaxed, we drove together in Radebeul across the Elbe. Christoph accompanied me to the famous brewery in Radeberg, and then drove back to Wilsdruff. Thank you very much for the great campaign! I will revise myself!
Shortly after Bischofswerda (km 710) another comedy. First a paved dirt road, then cobblestones, last but not least, the app wanted to send me across a field that could have been done with a mountain bike. I, however, continue on the cobblestone path until it came quite close to a main road, shoulder my bike there for a few meters, over the guardrail, and back a kilometer to catch the right turn-off to Bautzen. It went through Bautzen briskly, and at the end of the city my family stood with the coffee ordered via WhatsApp. More was not necessary for the remaining 40km to Görlitz. They rolled quite well, because the wind had turned a little more to the west. However, apart from Vettweiß (Düren) to Weilerswist, it is not a single kilometer flat on the entire route.

So it goes up and down again and again in front of Görlitz. A quick photo on the entrance sign and then down to the old town bridge. There I was greeted with applause by passers-by and my family. There were also spontaneous donations.

Due to the fact that the tracker had failed, the escort of PSV Radsport Görlitz unfortunately did not find me and had to go home alone. Too bad your accompaniment on the last kilometers would have been great. Thanks anyway!

After a shower we enjoyed the evening with a good meal and a walk through the old town of Görlitz. On Sunday we took part in a city tour. When we answered the city guide’s question about our origin with Aachen, he said that someone was cycling from Aachen to Görlitz. He read that in the newspaper. Well, at least in the minutes after that I was able to make more of an impression on the participants than the old town of Görlitz.

I would like to thank all of you who supported this campaign with donations, meals, slipstream, messages, emails, organize photos, stickers, and nerves. I am very happy that the project group Malabon raised almost 7000 euros (some donors did not donate through Betterplace)!

Let’s see what comes to mind next …

And for the statisticians among you:

Surprise in my mailbox